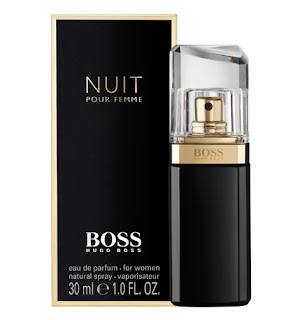 The new fragrance is a complex nature as it begins with contemporary yet elegant and fresh sparkling notes of aldehydes and peach. Nothing excites women as much as beach can. The heart radiates feminine white flowers, jasmine and sensual violet. The base consists of crystalline moss and creamy sandalwood.

Hugo Boss is never short on cash, so they know they can ire the biggest name out there to be the face of any of their given products. Gwyneth Paltrow has a new perfume deal with Hugo Boss. Saying she was "honoured" to be involved with Boss Nuit Pour Femme, It's a coup for the brand to land The Avengers actress who has in the past fronted ad campaigns for Estée Lauder Pleasures, Pure White Linen Light Breeze and Pleasures Delight. Of signing the star, the brand told WWD: "She is the perfect complement to Boss Fragrances."

Hugo Boss isn't exactly the first House you think of when it comes to women's fragrances, but Gwyneth Paltrow is hoping to change all that: she's been tapped as the new face of the upcoming Boss Black female scent. Gwyneth spoke about who the scent would be targeted to: "To me, the Boss woman is driven, ambitious and goes after what she wants, but she balances being strong and very feminine at the same time — characteristics that I strive toward in my own life."

It's hard to imagine what the always polished and chic Gwyneth would smell like, but Boss Fragrances says the Boss Nuit Pour Femme aims to transpose the timeless beauty of the LBD into olfactory perfection. It's an arresting, savvy metaphor: sprtiz on a little Boss Black and feel like Gwyneth in a little black dress on the red carpet.

Finally after all those Nuit+something else,  now a simple and efficace NUIT, in black and gold. Superbe, great idea, nobody has never thought to this before? It seems all so 80s inspiration: the bottle, the colors, the ingredients. Thinks If we are lucky it will be the first fragrance for woman by Hugo Boss to be decent to wear!
Posted by Hanitizer at 9:05 AM No comments: