Banned! An “overtly sexual” ad for CK One fragrances 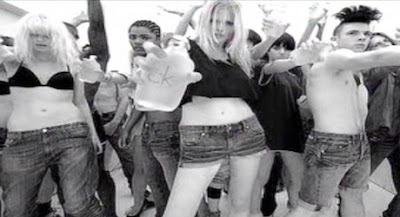 An “overtly sexual” ad for CK One fragrances showing a woman straddling a man while he touches her breasts has been banned from being shown when children might be watching.

The TV ad for the Coty UK-owned fragrance brand featured a group of young people including topless men and women dressed in hot pants and bra tops dancing.

A voiceover stated: “CK One, the original shared fragrance … CK One Shock, daring fragrances for him and her.”

The Advertising Standards Authority ruled the ad was “briefly overtly sexual” and acknowledged it might be “distasteful” to some but was unlikely to cause serious or widespread offence to most viewers if scheduled appropriately.

The watchdog ruled however, the ad was inappropriately scheduled and should have an ex-kids restriction before airing again.

Coty UK says the ad was a re-edited version of an ad which had aired previously which meant more flesh was visible. The company also said the ad was designed to “reflect the young and edgy spirit” of the brand, not to cause offence.

Clearcast, which cleared the ad to air with no time restrictions said the scene attracting complaints “was fleeting and was too quick for them to notice, so they had not recognized the potential issue with the ad”.

Coty UK fell foul of the advertising watchdog for similar offence in 2010 when an ad starring Beyonce promoting her own fragrance was deemed “unsuitable for kids”.
<a href="http://www.marketingweek.co.uk/news/ck-one-fragrance-ad-banned/4006124.article">
Source</a>