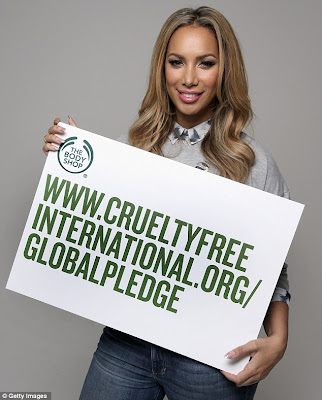 The world fell in love with Leona Lewis, the sweet and shy Hackney born singer with a four octave range, back in 2006 after she won the third series of the X factor. She might as well be one of the most active vegetarians in the world of celebrity.

Since then Leona has gone on to become a global star with international success with seven Brit Awards and three Grammy Awards nominations and over 20 million records sold worldwide.

As well as releasing her third album Glassheart this month, Leona has now joined forces with The Body Shop to be their new brand activist and raise awareness of cruelty free beauty with the launch of her new limited edition make-up and fragrance collection. Well done Leona! Beautiful woman with a beautiful heart. Other female celebs claim to love animals while promoting products (Cover Girl) that are tested on animals in cruel and horrific ways; Leona stands up for what she believes in - she walks the talk and I completely respect her integrity and commitment.

The Body Shop supports Cruelty Free International and their campaign to end animal testing in cosmetics, can you tell us more about this?
The Body Shop has always been against animal testing, but unfortunately some cosmetic companies aren’t and still use animals to test their products on or the ingredients they use to make them.
The Body Shop has joined forces with Cruelty Free International in their bid to push for a global ban on the testing of animals for cosmetics. Customers and supporters can either go into store and sign the pledge or visit www.thebodyshop.com

The Body Shop Limited Edition Collection By Leona Lewis is available from 26th March. Something to think about, The Body Shop is owned by L'Oreal. Biggest animal testers out there according to some.

Posted by Hanitizer at 8:50 AM